Cake is a tool which can be used to solve classical seismic ray theory problems for layered earth models (layer cake models).

For various seismic phases it can calculate:

Computations are done for a spherical earth. Cake can either be run as a command line tool or used as a Python module. Both is demonstrated in the examples below.

get information on model/phase/material properties

create a simplified version of a layered model

To get further help and a list of available options for any subcommand run:

Each subcommand has its own set of options. Use cake <subcommand> --help to see which of the following options apply to any of the subcommands listed above.

The definition of a seismic propagation path in Cake’s phase syntax is a string consisting of an alternating sequence of legs and knees.

A leg represents seismic wave propagation without any conversions, encountering only super-critical reflections. Legs are denoted by P, p, S, or s. The capital letters are used when the take-off of the leg is in a downward direction, while the lower case letters indicate a take-off in an upward direction.

A knee is an interaction with an interface. It can be a mode conversion, a reflection, or propagation as a headwave or diffracted wave.

The interface may be given by name or by depth: INTERFACE is the name of an interface defined in the model, DEPTH is the depth of an interface in [km] (the interface closest to that depth is chosen). If two legs appear consecutively without an explicit knee, surface interaction is assumed.

The phase definition may end with a backslash \, to indicate that the ray should arrive at the receiver from above instead of from below. It is possible to restrict the maximum and minimum depth of a leg by appending <(INTERFACE) or <DEPTH or >(INTERFACE) or >DEPTH after the leg character, respectively.

Use builtin model named NAME or user model from file FILENAME. By default, the “ak135-f-continental.m” model is used. Run cake list-models for a list of builtin models.

An isotropic elastic material may be specified by giving a combination of some of the following options.

Name or depth [km] of interface to select 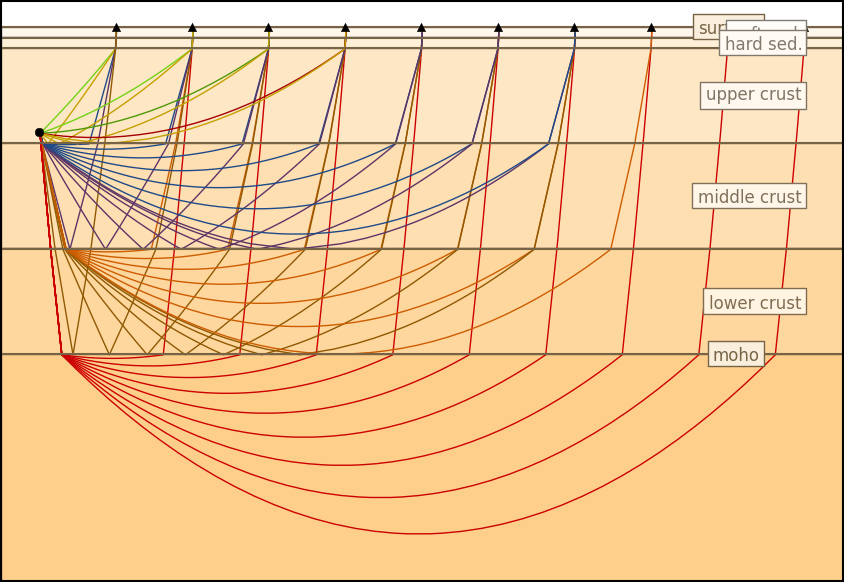 The option --crust2loc refers to the pyrocko.crust2x2 module and expects latitude and longitude of the source location.

Receivers may be at any depth. Arbitrary reflection/conversion histories may be choosen.

To print arrival times and other ray parameters, replace plot-rays with arrivals in the command line above.

To use classic phase names, use the --classic option:

It is possible to see the exact definition of a phase using cake print ...:

This tells us that the classic Pg phase is represented with two Cake style phase definitions, one for downgoing and one for upgoing takeoff direction and that there is a constraint on maximum depth.

Here’s another example to illustrate why cake needs its special phase definition syntax:

Cake can also be used to convert between different material parameters:

The scatter subcommand may be used to see how much energy (in percent) is transmitted through or reflected by an interface for any given surface slowness (P-SV case):

The following Python script calculates arrival times for the P-phase emitted by an event in a depth of 300km.